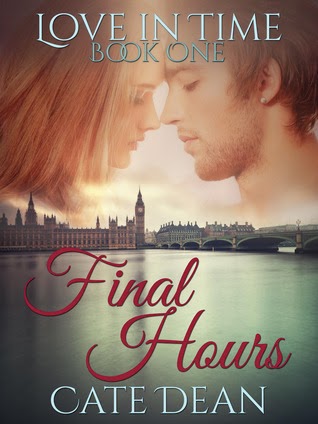 Time brought them together - will it also tear them apart?
Elizabeth Barritt fought hard to put her childhood behind her. Now she has the chance to move forward, to reach out for a new future.
Her first step takes her right into Jackson Kane's path. He is a time traveler, from the future, and on the hunt for a rogue agent.
Their attraction is immediate, unexpected - and for Kane, an unwanted distraction. When he is injured protecting Elizabeth, he is forced to make a decision that will change both of their lives. He takes her to his time.
Once Kane is healed, he has to continue his hunt, and he and Elizabeth say goodbye. But his journey back to war-torn London takes a sideways turn, forcing Elizabeth to make a choice. She follows him into the past, to help him stop one man from changing their future.
***For readers 18 and older.***

Final Hours is a romantic time- travel story by Cate Dean. A chance encounter by Elizabeth and Kane sets history on a new course. Together the two will fight to keep the past as it is written. Going back to Europe in 1941 the couple must learn to trust each other. Both having been orphan from different time eras they understand each other more than either would like to admit. While fighting to keep alive and save the lives of other around them they learn that attachment to another can be a good thing. With the help of their tech savvy friend Mac, who can calibrate their transports for the two to find each other, Elizabeth and Kane are able to find their way back to each other.
Like the character Elizabeth it took me awhile to understand that Kane and his comrades weren’t magical beings but time-travelers. Not normally a sci-fi kind of girl I really enjoyed the story. I liked that Elizabeth started off seemingly weak was able to find her inner strength and peace. The men that crossed her path weren’t their just to save her but to help her save herself. Kane was a great balance of man of mystery and true gentleman. He was tender when needed to be but would kill to save the lives of those he cared about. When these to finally come together physically it is sweet and spicy. Even the sub-plots in the story were intriguing and I wanted to know more about the other characters.

Fabulous, intriguing read. I loved this book. There is the suspense, the romance, there are sad parts, there are funny parts,there is even some action. The story was written well, the author kept me right there in the story, I read it in one sitting, couldn't put it down. Now I am anxiously waiting until I can read book 2.