Review for The Game of Love Box Set by Sharon Cummin 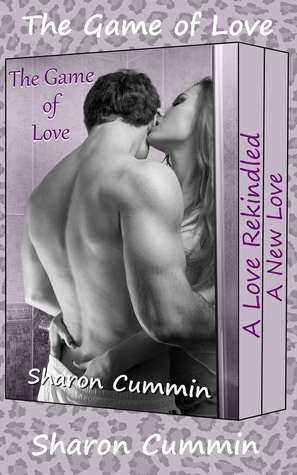 The Game of Love Boxed Set (A Love Rekindled and A New Love)
Warning: This story contains content which is intended for readers over the age of 18.

A Love Rekindled (The Game of Love #1)
Jessica was a sexy twenty five year old. Her friends at work talked her into going to a party at a co-worker's house. She had not been out in a very long time. She agreed to go, thinking she could leave after an hour and get back home.

Luke was a gorgeous football player who had just returned home after being injured playing for the Pittsburgh Steelers. His friend from college, Linda, tried to get him out of the house. She finally got him to agree to go to a party she was having and even talked him into taking one of her friends as his date.

Jessica arrived at the party to hang out with her friends from work. Her friend John pulled her along to dance with him. They laughed and joked as he dipped her. That was when she spotted Luke, her high school sweetheart, with her friend Heather. The only man she had ever truly loved.

Luke could not believe it, when his eyes connected with Jessica's. She was the woman who tore his heart in two. It took all he had not to turn around and take off out the door. His friend Linda pulled him into her home to show him around and meet her friends.

Jessica's heart raced as Linda brought Luke and Heather over to introduce him to the group from work. Her hands shook as Linda introduced her to Luke. She said a simple hello as he looked into her eyes in shock. Jessica excused herself to go over to the couch.

Jessica could not take it, she had to get out of there. Without saying a word, she took off out the door to her car. How could he have been at the party? Why was he with her friend Heather? Why did he have to look even sexier than she remembered?

When Luke couldn't get her off his mind, he knew that he had to see her. He pulled up in front of her house and could not believe what he saw. Luke wanted answers.

Renee was a confident twenty three year old woman. She spent the past six years helping her sister raise her nephew Lucas. Renee took her nephew shopping for the day so her sister could have some alone time. They were on their way home, when out of nowhere, Renee heard a loud crash and felt her body slam against the car door.

Dillon was a thirty five year old police officer. He was driving through the mall parking lot when he saw a young woman screaming and noticed the smashed in car. Dillon ran to the car and looked through the window. His heart dropped, and he felt the air leave his lungs as memories rushed through his mind. There was a little boy in the car, and he wasn't moving. It was the one thing Dillon didn't like about his job. Accidents involving children were hard for him. The sound of the woman yelling snapped him out of his head, and he hurried to help the boy.

The accident changed Renee's thoughts on life. She blamed herself for what happened to her nephew. Renee was sure she could have done something to avoid being hit.
When Dillon went to the hospital to check on the little boy, he could see that Renee was blaming herself. It tore at his insides that she was taking the blame. The situation hit close to home for him. He handed her his card and hurried on his way.

When Dillon offered to help Renee, she accepted it. Her family began changing, and she was lost. It was time for her to find a life of her own. She had no idea what she wanted to do. It was the first time she was living for herself and not for everyone else.

There was something about Renee that drew him in. Dillon found himself wanting to help her, but he knew falling in love was not an option. He had come to terms with growing old alone.

When Renee realized that love and a family was what she wanted, how would Dillon React?

Could he look beyond the past and allow himself a future with happiness, or would he let her walk out of his life and stay alone forever?

Jessica is a 25 year old single mom of a 6 year old little boy. Her sister forces her to go to a party. She was having fun, until a blast from the past shows up.

She has a secret though.

This is a story about their second chance at love.

Usually I like these types of stories. This one was okay. There were some editing errors, missing words. But the story itself was predictable to me. I was actually surprised that Luke wasn't really angry or mad at Jessica for keeping that to herself for all that time.

She tells him, and they just jump into bed and have sex. To me, the sex scenes were a little boring. I caught myself skimming them for the most part. I've had a few of the authors books to review, have already read a couple of them. The sex scenes are all very similar, with characters in one book, saying the same thing as the characters in another during the sex scenes.

It's not a bad read, but just wasn't for me I guess.

We meet Renee in the first book. She is Jessica's 23 year old sister. her life is changing since right before the car accident. Luke is back, so Jessica doesn't need her as much and her nephew is getting older, so he also doesn't need her as much. She is just now starting to live her life, for her. She just needs to come up with a plan and put it in motion.

Dillon is the sexy cop, she met because of the accident. They become fast friends. He doesn't want love though, because of a tragedy 2 years ago. And he is 35 years old.

Will Renee shatter his walls?

While I did enjoy this book a little more than the first one, there were still the same editing issues as the other books I've read by Sharon Cummin. I found myself skimming through the sex scenes again. They just felt like the same to me. If there is sex in the book, I like each scene to be different to keep me interested. Overall, not a bad read though.